Project Brief: This project was done during my exchange program at KTH Architecture School in Stockholm, Sweden. The theme of the studio was on “Architectural Fictions.” The first half of the semester was about writing future scenarios. Each group was assigned a basic theme to start with. The themes were: Post-Growth, Automation, Demographic Change, and Peak Everything. We studied works done by Liam Young, Suprastudio, and Archigram, analyzed sci-fi films, and developed a master plan for a neighborhood in Stockholm, Sweden that would serve as our building site and testing grounds. The second Half of the semester required a large scale model and a Veduta (large scale image) that depicts the society we developed from the first half.

Peak Everything as we defined is when the earth has reached 50% output on all natural resources (oil,fresh water, oxygen, etc.) The Earth can no longer sustain human life the same way it did in the past century and so it goes through a huge population decline and societies enter total chaos due to famine and poverty. Years after the population decline, society regains peace and new societies emerge with an optimistic way of living. The society is forced to use primitive methods for survival. Although the society is primitive, the technology developed in the past centuries remain. The only thing lacking are the resources and so the societies have found ways to combine modern technology with primitive mechanics and logic’s. Granted that in this society, we have dreamt up a scene that is slightly utopic and optimistic but with an underlay of mischief and eerie. 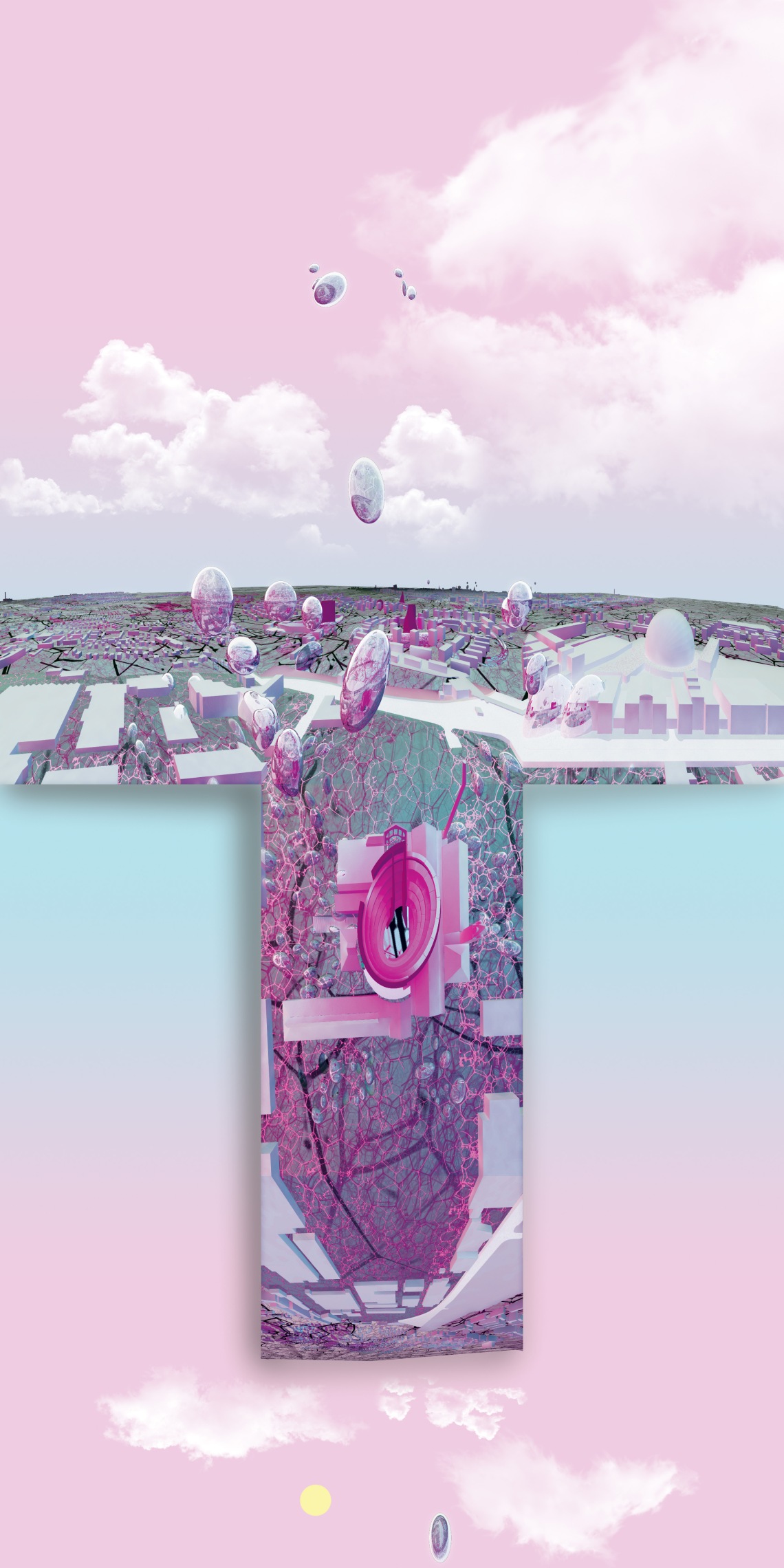 Sea levels have risen and changing geological shifts cause Stockholm to be flooded with sea water. Winters are extra long here in Stockholm so the city is completely engulfed in ice. A new type of geological rock found deep within the depths of Stockholm allowed the new society to  create a dense network of underground tunnels that branch throughout the city. It created new streets, infrastructure, and provided growing spaces for hydroponic farming. Most existing buildings are destroyed by the climate change but the will power of the local residences persevered to save certain buildings to serve as their community headquarters. Using collected rubble and other building materials they quickly erected what is known to them as the “Monument.”

Each neighborhood has their own “Monument.” It became a building type to preserve all building types. The form was influenced by everything within the area whether it was a curve from Globen, or an imprint of a truss from an old warehouse. It was a desperate way retain some of the history and local culture of the area before the climate had completely consumed it. Of course they couldn’t save all the buildings, there just isn’t enough man power to go around and preserve buildings when the society needed to focus on growing food and making sure they don’t freeze to death. The monument also served the community as the main public square. It was designed to be a place for eating and cooking together – a giant hearth for social interaction and bonding. The height of the monument was tall enough so that it could be seen anywhere around the neighborhood. The monument is a giant mesh of large halls, big steps, curving walls, and expansive openings it so people could wander through it like you would in a public park. 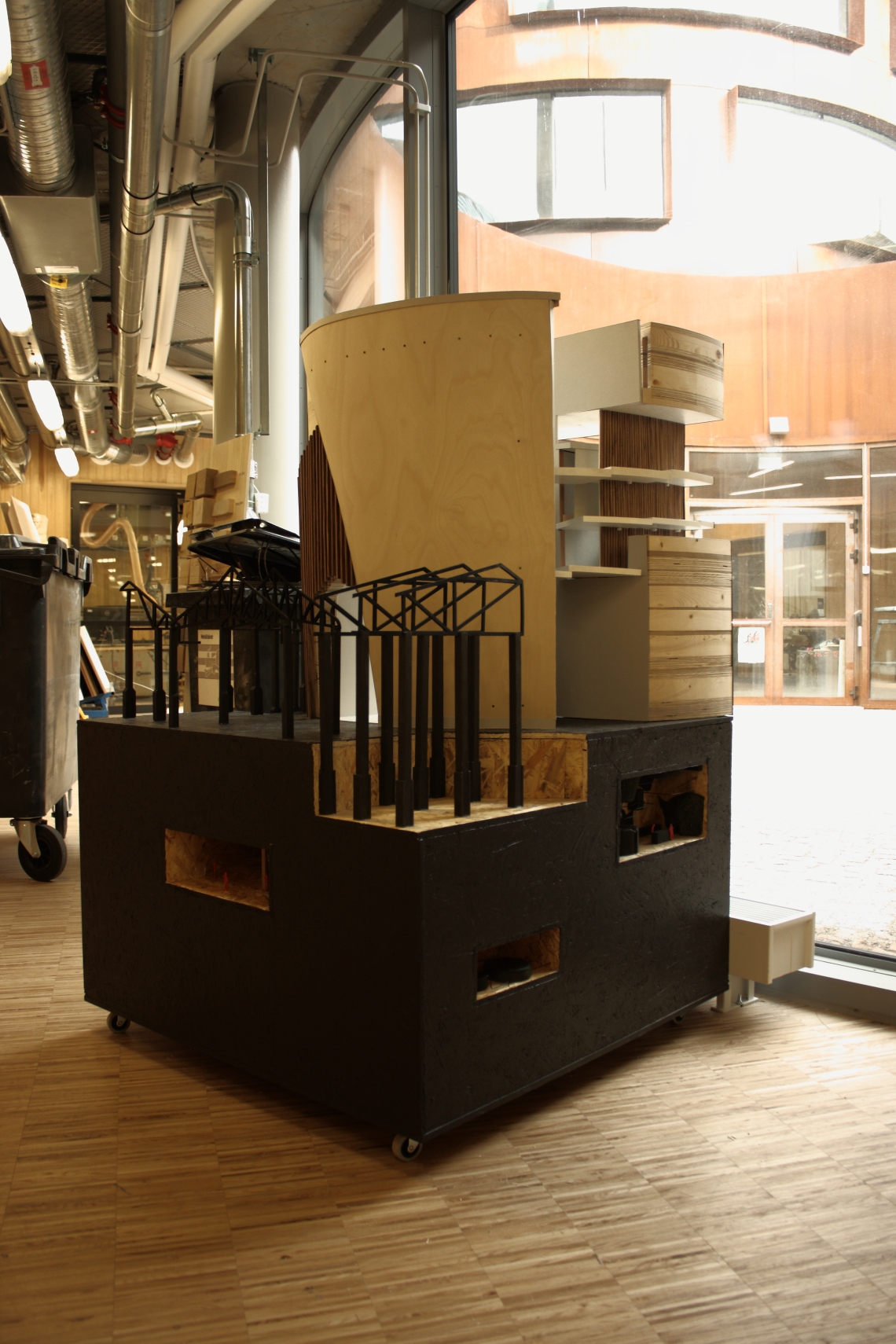 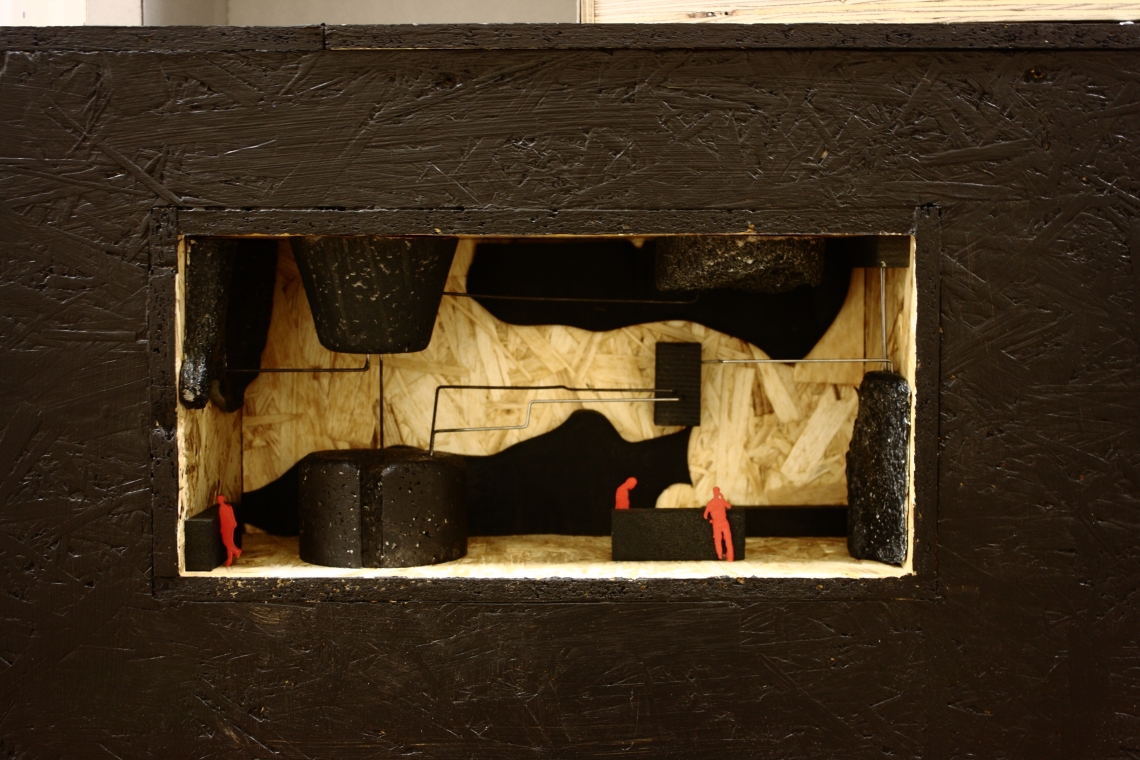 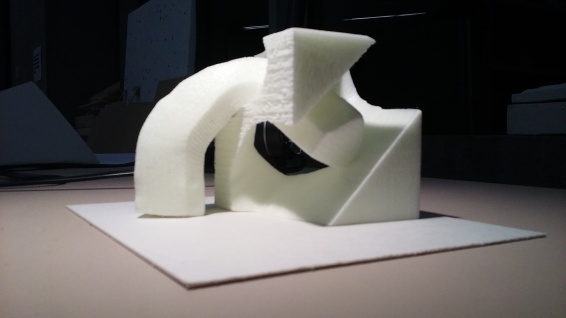 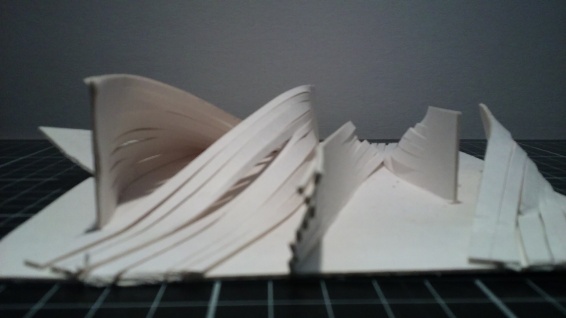 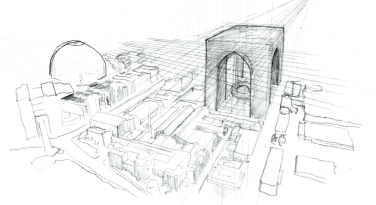 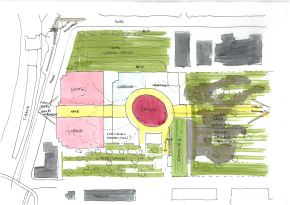 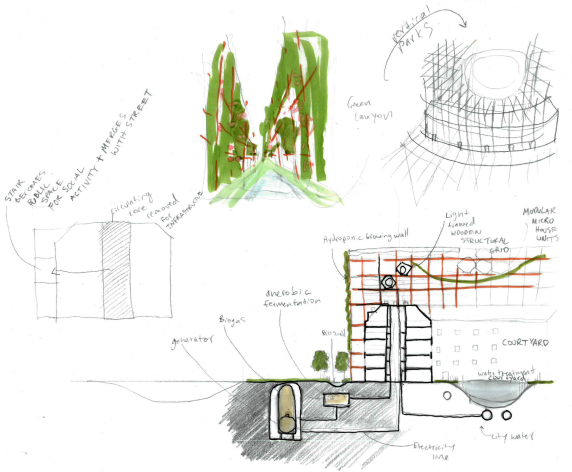 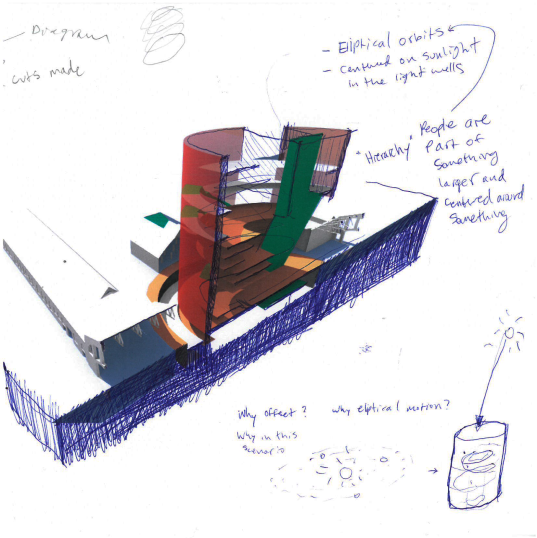 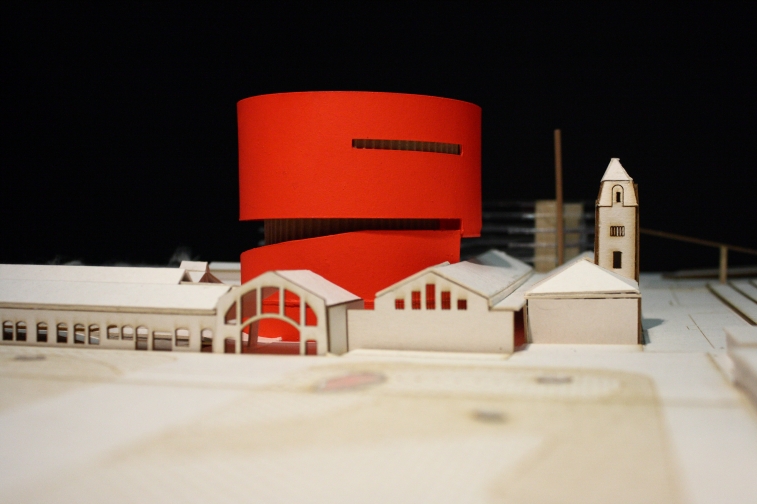 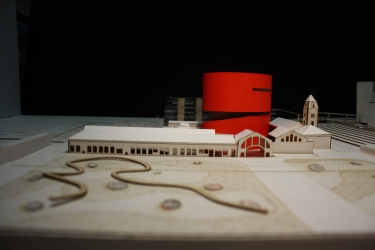 Material Abstractions of the Existing 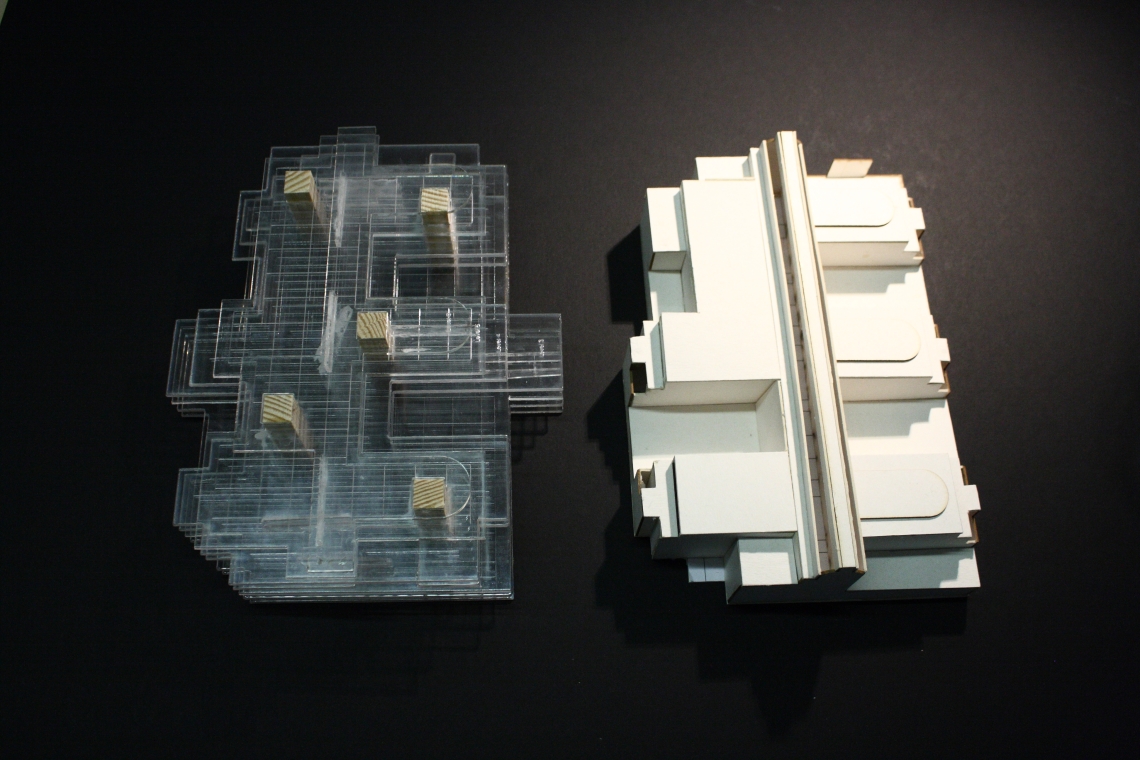